»Design your own color palette based on HCL principles.«

»Do your figures work for viewers with color vision deficiencies?«

The hclwizard provides tools for manipulating and assessing colors and palettes based on the underlying colorspace software (available in R and Python). It leverages the HCL color space: a color model that is based on human color perception and thus makes it easy to choose good color palettes by varying three color properties: Hue (= type of color, dominant wavelength) - Chroma (= colorfulness) - Luminance (= brightness). As shown in the color swatches below each property can be varied while keeping the other two properties fixed.

By choosing suitable trajectories along the hue, chroma, and luminance axes of the HCL color space, a wide variety of HCL-based color palettes can be designed. Some further examples are provided below.

Somewhere over the Rainbow

The go-to palette in many software packages is - or used to be until rather recently - the so-called rainbow: a palette created by changing the hue in highly-saturated RGB colors. This has been widely recognized as having a number of disadvantages including: abrupt shifts in brightness, misleading for viewers with color vision deficiencies, too flashy to look at for a longer time. For more details and further pointers see “The End of the Rainbow” by Hawkins et al. (2014) or “Somewhere over the Rainbow: How to Make Effective Use of Colors in Meteorological Visualizations” by Stauffer et al. (2015) as well as the #endrainbow hashtag on Twitter.

In a nutshell, the (in-)famous RGB rainbow palette is virtually always a poor choice and properly balanced qualitative, sequential, or diverging palettes - such as the HCL-based palettes provided here - are preferable. Despite such alternatives becoming more and more widely available the rainbow palette is unfortunately still widely used. Below we show some wild-caught examples, highlight their problems (e.g., by desaturation to grayscale or by emulating color vision deficiencies), and suggest better alternatives.

When you see a (scientific) data visualization with a rainbow, ask yourself: Would Bob Ross approve of this?

Most likely not. In contrast, choosing a HCL-based palette instead will yield less flashy colors that change smoothly...very much in the spirit of The Joy of Painting. 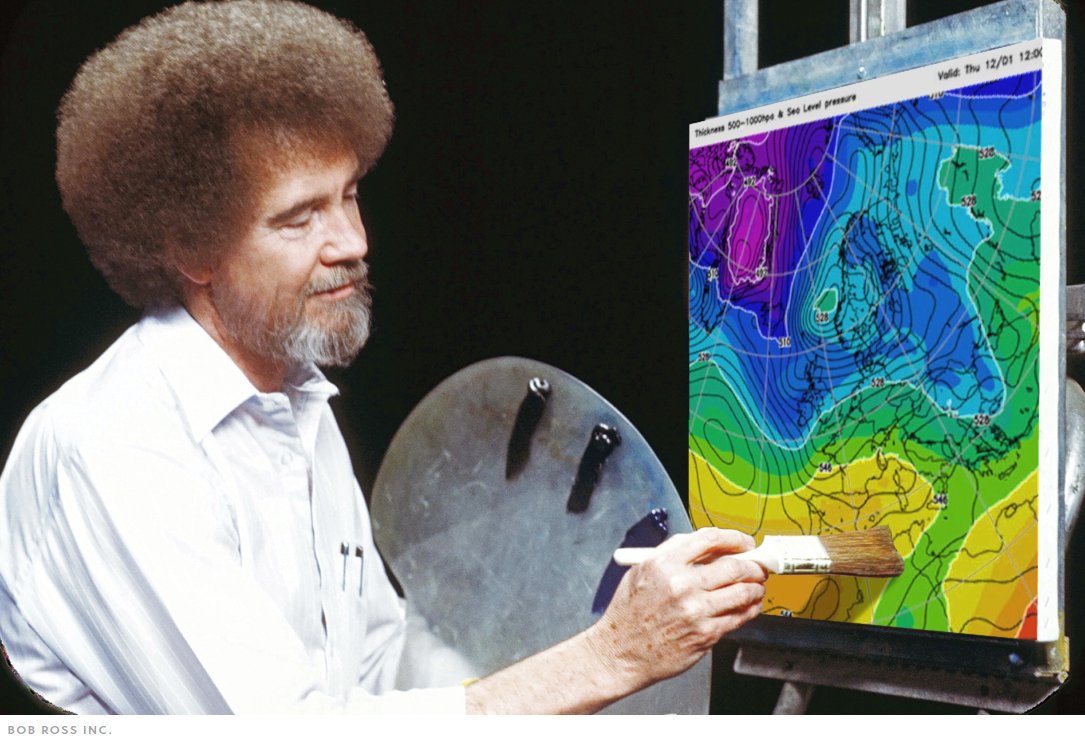 Heatmap from The Grammar of Graphics

Even in the excellent book "The Grammar of Graphics" by Wilkinson (2005), the rainbow palette is used in one of the first figures, depicting a heatmap of a bivariate kernel density estimate.

Weather forecasts are often communicated through shaded maps. As an example the dewpoint temperature forecast (NOAA EMC) from a certain FV3 Global Forecast System (GFS) product is shown. It does not use a standard rainbow but the palette is also composed of highly-saturated colors with a wide range of hues.